Past News and Events: Archive

The Master course «Digitalization and Sustainability: Friends or Foes?» will start on October 10th, 2022

Every year since 2020, the Project Digital Literacies organizes a lecture series on a different topic related to digitalization.

In 2022, the project has teamed with Prof. Frank Krysiak (Faculty of Economics) and Arne Menn (Head of Sustainability) to organize an innovative master course on sustainability. In order to allow for the general public to benefit from the content of the course, the talks and discussions will be recorded and published online.

You can find detailed practical information about this course in the course directory of the University of Basel.

The flyer of the lecture series can be downloaded here (PDF document, 2.8MB).

In the last decade of the 20th century, many early enthusiasts of the emerging digitalization process regularly emphasized a positive side-effect of this transformation: digitalization, they argued, would allow for a more sustainable, less resource-hungry form of social and economic development.

In the past twenty years, this optimistic discourse has given way to a much grimmer picture. Overuse of raw materials to produce digital devices, new forms of precarious labor, social fragmentation, spread of false information as a result of fake news and political polarization: all these phenomena and many more have now turned into standard headlines.

Digitalization in its current form, on the one hand, and sustainable development, on the other, do not seem to necessarily belong together after all. But is a combination of these two goals really out of the question? If not, what should be changed in the digitalization process to make it more sustainable?

In this lecture series, we will hear twelve experts in their field present their views on the challenge posed by digitalization to sustainable development, as well as on how to render these two processes more compatible than they seem to be now. 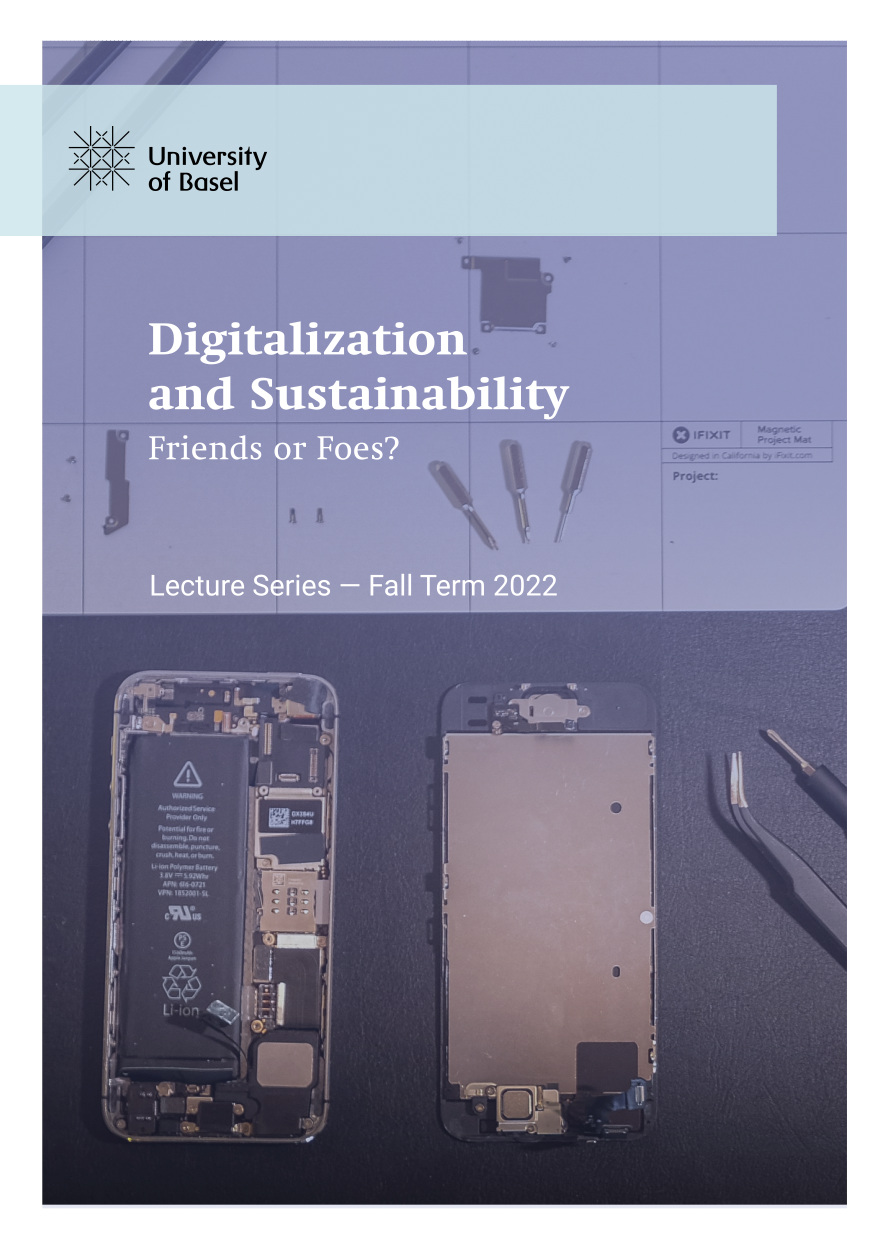 «A World of Data? Reflections on a Global Social Transformation»

This fall term, as every year, the Project Digital Literacies organizes a lecture series (Ringvorlesung) to promote a reflective approach to digitalisation. The lecture series is the result of a close cooperation between the Project Digital Literacies, the Center for Data Analytics and the Digital Humanities Lab, with the support of swissuniversities. This term, the focus of our investigation will be data and datification. 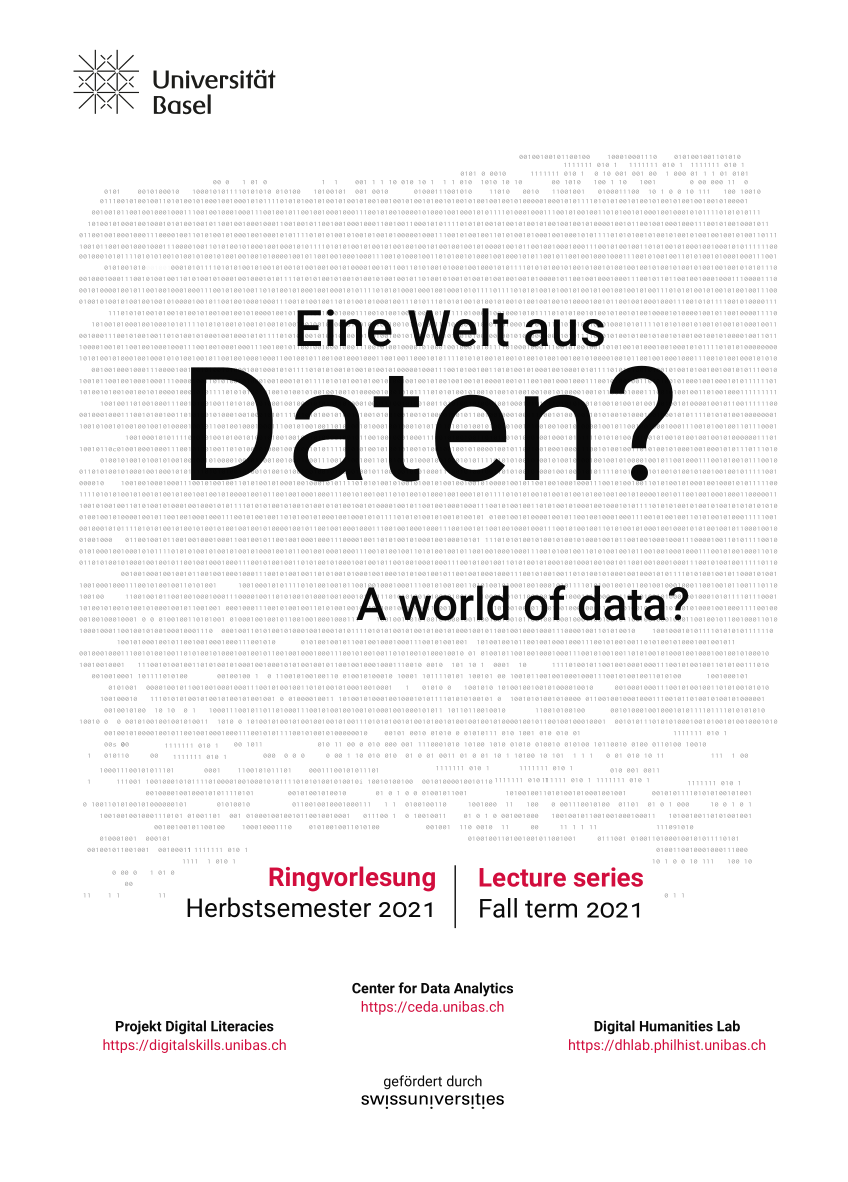 «A World of Data? Reflections on a Global Social Transformation»

With the trends towards digitization in virtually all areas, the interconnection of computers by way of the internet, and the emergence of automatic, algorithmic ways to collect data, we have witnessed an explosion of the quantity, quality, and accessibility of data.

What can we currently do with data? What will we be able to do in the future? How to ensure that data is put to good use, e.g. for research as opposed to surveillance? What is the role of single individuals in this, and what is the role of organizations, including public institutions such as universities and administrations?

This lecture series will showcase a few examples of current data-driven research, discuss how social and professional activities are being transformed by data, and provide information on some of the most burning debates.

In this lecture series, some of the sessions will be in English, while others will take place in German.

All sessions take place simultaneously in-class and online via video-conference (Zoom). Please note that for time being only the students of the University of Basel are allowed to follow the lectures in-class.

The link to take part in the sessions via Zoom can be found on the ADAM web page of this course.  Interested persons without ADAM access or from the general public are invited to contact digital-literacies@clutterunibas.ch.

Note that all lectures will be recorded and made freely accessible online to the general public after a few days. The links to the videos will be posted on this web page.

You will find more information in the flyer of the lecture series as well as in the course directory of the University of Basel.

Digitization is transforming all areas of society, politics, science and the economy. But what does that mean more precisely? Does it mean that all jobs will be taken up by machines, that politics will structured by filter bubbles, and that all medical diagnostics will be the product of artificial intelligence?

In order to answer these questions and many others, the Project Digital Literacies has organized as transdisciplinary lecture series on the challenges of digitalization. Most lectures will take place in German, but some sessions will be in English.

Please refer to the detailed program on the corresponding German-language page. 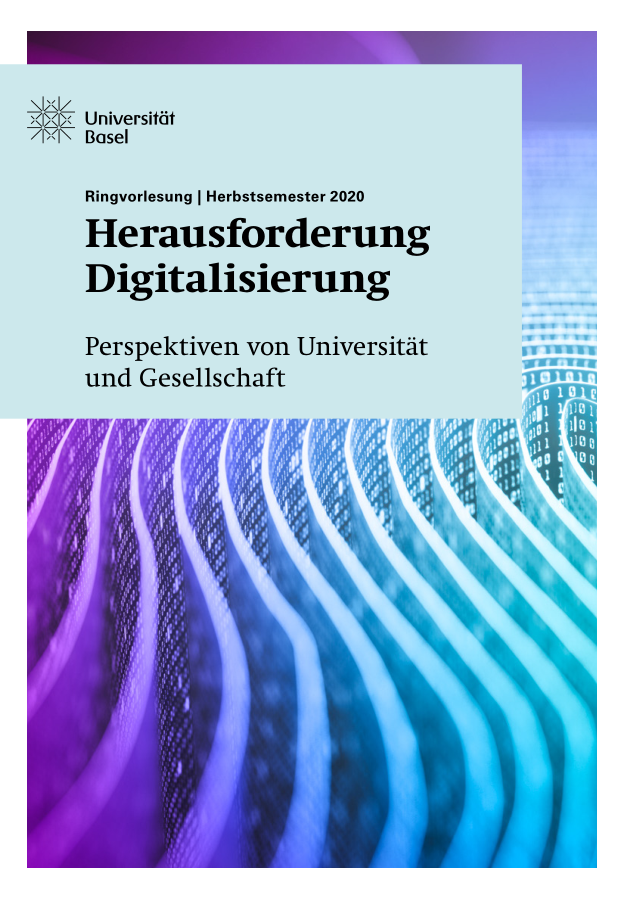